Resolved
by george moromisato 13 days ago

The deployed barricade stations are all called "titanium barricade". Although docking will reveal whether they are quad, double or single in the screen description it would be clearer if they were called this in the targeting display.

Or possibly a slightly different station image could be used for each. Maybe a slightly bulkier image as the mass increases?
---------

The damage/integrity values are glitchy between stations and items.
A targeting display value of "Hull: 69% " will show as "integrity: 50%" for the recovered item in the cargo hold.
Sometimes an integrity value doesn't show for damaged recovered items but they also don't stack with undamaged items.
In the attached image the first item was deployed and recovered undamaged, the second is "Hull: 86%" when deployed and the third is "Hull: 42%".
---------

A barricade attribute would be handy in the StationType to filter them in object lists.
---------

Minor. If the barricades are deployed using sysCreateStation they do not have an %itemName% or mass value in &dsBarricade. 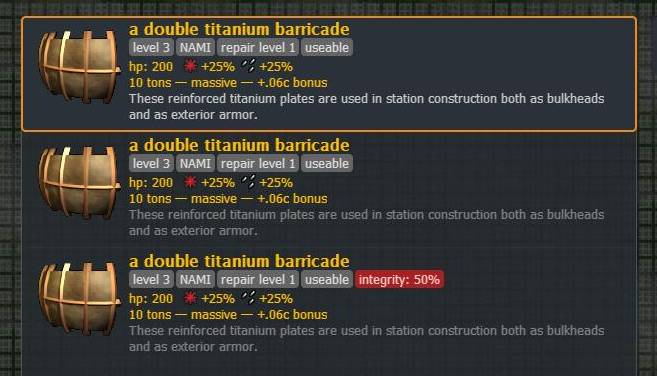 EDIT: In 1.9a2 deploying and recovering a damaged barricade can alter its integrity to 50%.

The deployed barricade was later damaged by NPC fire to read 'Hull: 32%' in the targeting display.
On recovery the integrity showed as 50%.
Futher deployments of this barricade showed 'Hull: 32%' and further recoveries showed 'integrity: 50%'.

Undamaged barricades show no damage during deployment or after recovery.

Additionally all barricades altered to 50% by deployment will stack as multiple damaged barricades on recovery. The 32% barricade does not even though it also shows 50%.

Fixed in 1.9 Beta 4. We now track HP accurately. We even handle the case of deploying a barricade enhanced with carbon-weavers (to gain extra HP).